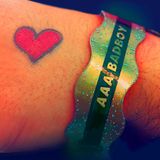 Kaptin Barrett is a DJ, radio presenter and also head of music for Boomtown Fair, the UK's fastest growing and most ground breaking festival. His latest alias (pron. Triple A Badboy) is a nod to his long term involvement with festivals, dating back to the days of manning the Glastonbury gates as a 5 year old (with his Dad's supervision of course).

The term is used by festival crews for an Access All Areas pass but Kaptin also wanted a project that allowed him to explore across his wide ranging musical tastes, so don't expect the same mix twice.

Under many other pseudonyms and projects, Kaptin plays regularly at most major alternative UK festivals such as Glastonbury, Bestival, WOMAD, Secret Garden Party, Green Man, Festival Number 6 and of course BoomTown. He has also recorded mixes for various radio stations including BBC Radio 1 and BBC 1Xtra.