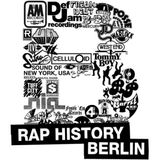 Never miss another
show from RapHistory.net

Rap History is a party series that originally was started in Zürich/Switzerland and later took (and still takes) place in many other cities in Europe such as Berlin/Germany, Warsawa/Poland, to name a few. At Rap History parties the djs exclusively play tracks released in a single year in chronological order starting from 1979 at the first party until the present year gets reached.

Our mixcloud account will mainly feature mixes that were originally released alongside the Rap History magazines that usually include a mix cd by various djs that played at the party.