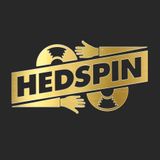 Never miss another
show from Hedspin

The R Mixtape Volume 1.0 (All Rakim Mix)
by Hedspin

Hedspin is a world class DJ and has been globe trotting for over a decade.His mix shows, edits and remixes have been played in clubs and on airwaves around the globe from Toronto's Flow 93.5, LA's Power 106, Sirius XM and BBC Radio One to name a few. You may have also downloaded Mobbin, his single with Grandtheft on Mad Decent that made the iTunes dance chart Top 10.

In 2011 he won the Red Bull Thre3style World Championship proving he is one of the best party rocking djs on the planet. During a live showcase - no matter what continent, Hedspin flexes musicality, technicality and aggressive delivery as he keeps the crowd moving in a way that only a world champion can. More than a DJ, Hedspin is a true performer, and the chance to catch him is an occasion.