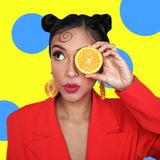 Farah Farz is a Singapore-based open-format DJ whose name has become synonymous with the local nightlife scene. Variety is her forte-- her eclectic sound is a dynamic mashup of genres ranging from Hip-Hop, RnB, Top 40s, EDM, House, Trap, Twerk and Retro. Since her debut in 2015, Farah’s skill has seen her perform at gigs all over Asia and destinations further beyond the continent, such as Australia and the Netherlands.

Recent impressive feats of hers include achieving the Finalist position at the Queen of Mashups 2018, ranking #75 at DJANEMAG 2018 SEA & NZ Top 100, and clinching 3rd Runner-Up place at the Queen of Mashups 2019. In 2016, just one year after she got acquainted with the decks, Farah emerged #46 in the DJANEMAG 2016 SEA Top 50, a premonition that she would soon become the musical virtuoso she is today.