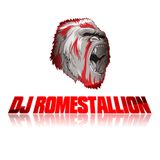 A San Francisco native, DJ Romestallion’s passion for music began at the age of 12 when playing the clarinet and vibraphone at Aptos Middle School. During his late teens as a club promoter he saw another aspect of music and entertaining. After graduating from Terra Nova High School and attending San Francisco City College where he obtained the 2003 Junior College Football National Championship with the Rams, his athletic career as a centerfielder granted him a full athletic baseball scholarship to Mississippi Valley State University.

After a year at Mississippi Valley State University he continued his education at San Francisco State University with a degree in Journalism, all throughout this his love for music by his side. During his college years his teammates and classmates became very familiar with his playlist “Butt Slaps.” After graduating from SFSU and interning at CBS 5 and ABC 7, he ventured back to his love of music and began learning the art of DJing.