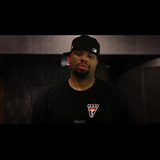 Never miss another
show from BIGVON

BIGVON has held down the number 1 rated radio show for the past 15 years and has been proven to be the hardest working man in radio! Born in New Jersey but raised in California, has been running Bay Area radio for 15 years. He held title for the the longest radio shift in the nation. Everyday you can hear Big Von on 106kmel from 2pm till 11pm MONDAY TO THURSDAY. Friday NIGHT FROM 6PM TO 12AM !
Big Von's talent with rocking a crowd is known nationwide, and has DJ’d for artists like 50 Cent, David Banner, Mos Def, Wu tang Clan, and Lupe Fiasco. Well known as a mentor and leader throughout the music industry.
Done Different:
Not only is he a DJ but a VOICE that plays a major influence in the west coast music industry. The main goal with the position that he has is to take someone’s big dreams and helping them become big stars! With that, his goal as a DJ is to help mentor up and coming artists.
Shows Per Year: 200+