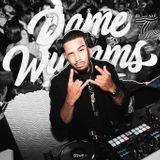 DJ Dame Williams has solidified his position as an amplifying DJ of Philadelphia. A luminary affiliate of the world-renowned Scratch Academy, Dame has become a favored tastemaker for some of the largest corporations in the US including; Nike, Beautycon Festivals, Cyclebar, Athleta, Hollister, Redbull, and The Collegiate Rugby Championship, while rocking hundreds of clubs and private events throughout the years.

With roots stemming from the urban eclectics of Pennsylvania, his presence has since expanded across the east coast to areas like New York, New Jersey, Maryland, Delaware, Florida, and California. Through his musical excursion, Dame has received mentorship from some of the biggest names in the industry including; Cosmo Baker, DJ Sat-One, Rich Medina, DJ Damage, DJ Royale, & Mike Nyce.