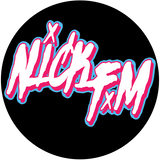 Never miss another
show from NickFm

Reigning from the Riverside, California. Nick F.M. has established himself in the international Dubstep community early on with such remixes as “Movados”, “Gangsta 4 Life” & La Roux’s “Bulletproof”. Along with his charting debut release off of Monkey Dub Recordings "Sleeping Giant".

Nicks music has been supported by such artists as Reid Speed, Dainjah, Iray, Selecta M16, Danielson, Freewill & L.A.s Finest. Yet, more known for his heavy synth, sample based Hip Hop beats. Nick F.M.’s music is definitely in your face, aggressive, & attention to the detail. Whether it's his Hip Hop take on DnB, Electro, or Dubstep . The production bar is constantly being raised with every release. Nick is always bringing you only that Raw griminess with his productions.
His DJ sets are very lively, intense, & filled with tons of energy. He'll have you move from the 1st to last song in his set.