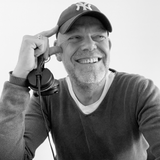 Never miss another
show from FrenzCook

Heaven Or Hell
by Barry DJayReposted

OCEAN OF DIAMONDS
by Kirsten_kleoReposted

Music has been my greatest passion since my childhood. Started as a DJ at school parties and at home trying to make my first remixes. I got my inspiration from mixed broadcasts on illegal radio stations in The Hague, Leiden and Amsterdam. My first DJ gig was in 1992 and rolled into the dance world. Running weekends in clubs for 900 visitors was no exception. Organizing Reunion-classic evenings to even organizing a Beach Festival in Bloemendaal and later the "Indoor Festival-Amsterdam" was a logical extension of this together with other DJ friends such as Barry Djay. During the Covid period I started streaming and posting a lot on-line which is quite strange to play in front of cameras instead of frenzied dancing audience. Now quite used to it but longing to play for happy party peoples again, and it looks like we are going in the right direction. My spinning style can be described as cheerful, summery House and beach house either.