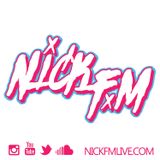 Never miss another
show from NickFm

Reigning from the Evil Empire Riverside, California. Nick F.M has established himself in the international Dubstep community early on with such remixes as “Movados”, “Gangsta 4 Life” & La Roux’s “Bulletproof”, & his charting debut release off of Monkey Dub Recordings "Sleeping Giant".

Nicks music has been supported by such Reid Speed, Dainjah, Iray, Selecta M16, Danielson, & Freewill. Yet more known for his heavy synth, sample based Hip Hop mash-ups. Nick F.M’s music is definitely in your face, aggressive, & attention to the detail. Whether it's his Hip Hop take on DnB, Electro, or Dubstep . The production bar is constantly being raised with every release from Nick F.M.

Nicks always bringing you only that Raw griminess with his productions. His DJ sets are very live & intense with tons of energy and having you wanting to party from the 1st to last song in his set.

Be on the look out for his next show & new episodes coming out every month called "Live from The Bungalow" .