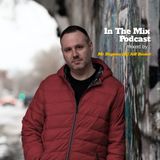 His musical tastes appeared when he was 5. It all started when his mother would make him dance in front of all his family during the holidays to good ol Quebec folk and dance songs. But it was Disco music that excited him so he started to listen to all the songs that his brother would bring to the house on 45’s.

Amii Stewart, Lipps Inc, France Jolie, Voggue, Anita Ward, Sylvester and several others were his favorite artists and groups whom he regularly listened to in front of his Father’s old wooden phonograph.