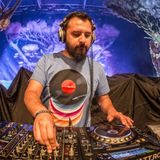 Julian M is a dj/producer from the coast of the Black Sea, now living in Transylvania, focused mainly on deep-house & lounge music. His favourite tools are the turntables, being quite against mixing software. He loves analog stuff, and music that's made with soul, and always chooses his tracks by feeling.

He started mixing music around 1999, and since then he has been playing all around the country. He was also a resident dj for many years in different venues, and has made radioshows on a handful of radiostations.

Aside mixing, he plays drums and guitar, while his own productions go further to more complex compositions ranging in styles as trip-hop/alternative/post-rock. He loves classical music, and string orchestras in particular.
Also, Julian's into analog photography for more than a decade.