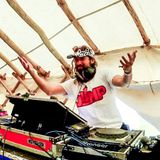 In his own words: “I've had some fantastic experiences from being in a band that played to an audience of 100,000 at a festival of peace in Kazan, Russia, to supporting Grandmaster Flash in Bristol, doing sound for the Foreign Beggars, and DJing at a private party in one of St.Petersburg's grandest palaces.