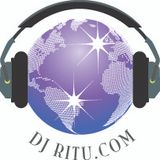 Never miss another
show from djritu

DJ Ritu is a London-based broadcaster, club promoter, concert producer, and globe-trotting DJ. She's the founding CEO of culture-crossing organisation A World in London which champions artists making music outside the mainstream.
Ritu has toured in over 35 countries as a solo artist and band leader, co-founded Outcaste Records, and has compiled numerous albums for the Rough Guides. Her musical repertoire incorporates Soul, Disco, Motown, Pop, as well as every World genre you can think of!