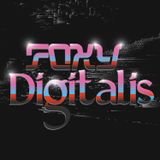 Inside No. 9, Episode #5: When I Sing, Mountains Dance
by Foxy Digitalis

Listening Arcade / 11th May 2022
by CAMPReposted

Brad Rose started Foxy Digitalis for the first time in 1995 as a xeroxed paper ‘zine with a combination of music coverage and personal wanderings. Four issues later, it went into the first hibernation. In late 2003, Foxy Digitalis reappeared as an online music magazine, co-(re)created by Brad and Eden Hemming, covering much of the same ground. For nearly 10 years it grew and grew. Well over 100 writers contributed during that time. It’s hard to quantify all of it. Then in January 2013, it went back to sleep. But unfrozen by the world on fire, it’s time to write about weird music once again. Foxy Digitalis covers experimental, out there sounds from all over the globe so you can channel waves of vibe.