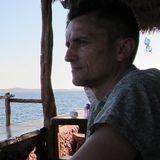 Never miss another
show from silkyjack

At the age of 16 he got developed a passion for electronic music.
This passion made him purchase his first decks, a couple of second hand JB-systems.
Having developed the right skills, he took his preferred style to the clubs; house music.
He played in the biggest clubs in Belgium and did some international guest appearances.
A couple of those appearances happened to be in Ibiza.
In Ibiza he got in touch with chill music and the balearic sound.
It became the sound of his choice, his signature sound.
Which resulted in his much listened to Easy Notes mix.
A sound suited for bars, restaurants, sunsets, beaches, trendy places and webradio.
In the past bhotradio.com, rs1.be, westradio.gr and idealclubradio.com programmed Easy Notes on their schedule.
Currently streamed on zenfm.be, casafondaradio.com and beachgrooves.com.