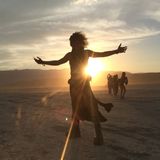 Lenny Ibizarre emerged into the music scene in Ibiza in 1997 where he started work on his first album, the Ambient Collection, which was signed by Warner Music UK.

Since then Lenny Ibizarre has produced 12 albums and is a multi-platinum selling artist. His Chilled Ibiza Compilations sold over 1.5 million copies in the UK. The Ambient Collection reached its 6th edition in 2007.

In 1997, Lenny Ibizarre also founded his record label, Ibizarre Records as well as founding the annual international DJ Awards. He also oversaw the European Unions technological investments into the Ibiza music industry, and has recently been requested to provide music for Ocean awareness for the United Nations.

As a DJ, Lenny Ibizarre has held residencies at Cafe Del Mar, Pacha, Khumaras, Ku (Privilege) and Amnesia. He also performed several times for the Cirque Du Soleil in Montreal and Las Vegas for the Beatles Love show and their anniversaries.

Lenny Ibizarre is also a much respected remix artist favorin