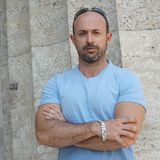 Roberto is a music producer and DJ from Málaga (Spain) whose favorite genre is EDM in general, especially Dance Pop and House in all its variants. A creative guy and above all self-taught who loves to lift weights.

His musical history begins in 2018. In his first 2 years he manages his first million streams on Spotify. His strategy is simple: Continuously produce music and surround himself with great professionals to continue learning and improving. For example with vocalists or songwriters who regularly collaborate with renowned music producers for major record labels or also with sound engineers who have even won Grammys.

Until now he has produced more than 50 songs. Among his achievements, he has been in the Top 10 of Spinnin Records Talent Pool on multiple occasions and has already signed under big labels like "Blanco y Negro music".