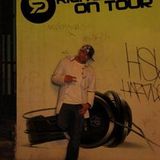 PLAYING IS MY WAY TO TEL A STORY"

Borned on the 21st May in Santiago, Chili.

By the time he was 8 years old he moved to the Netherlands. At the age of 18 hi started working as PR manager in a dance club call ‘De Maan’ in Rotterdam. His enormous attraction to music will make spinning the wheels the following natural challenge. One night in 1996 he did a

session without any preparation or practicing . . . by the crowd’s overwhelming respond and Rick’s superb way of playing the owner knows he is dealing with a born DJ. Within very short notice Rick gets his own (Saturday)nights, which are that successful that not long after he plays four nights a week being the house-DJ.

At the end of 1997 Rick has already made reputation at big parties like Phantasia, Plastic Fantastic, etc. He plays among great names in the dance scene, and is called a natural talent in the TV-program ‘the DJ’s of TMF & MTV’. By playing in clubs with well-known names like ‘La Pac