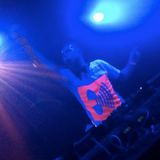 Never miss another
show from RDSLG

Three Colours of Mix Trilogy: Blue is the colour of Deep
by e11e

Drawn to electronic music as a kid by Kraftwerk’s Computer World album RDSLG started playing music at house parties in the nineties. Promoting events in Austria - including the official Depeche Mode release events at Vienna's legendary U4 club - were next.
Gigs in Europe, Canada, and Japan, performing with the likes of Erol Alkan, Mason, Para One, Data, Teenage Mutants, and Moonbootica among others, followed.
RDSLG hosted two radio shows as well as t-mobile's “Electronic Beats On Air” on Austria's largest private alternative station, “Radio Soundportal”. Based in the UK since summer ’11 RDSLG has been playing all over the capital and elsewhere.

In other words: Expect a melodic and danceable but never intrusive mix of recent electronic tunes, loosened up by the occasional dance floor classic.