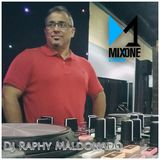 Dj Raphy Maldonado
He started in the professional environment in 1987 where he worked for Pop Joseph Café, in 1988 he was hired as a DJ at the Julianas nightclub at the Caribe Hilton hotel, together with head dj Carlos Fernández, that same year he was invited to be part of the prestigious family of Dj`s of MUSIQUE XPRESS where he worked for 4 years. Eventually he worked in different Pops and clubs, in 1997 he began to work at the NIGHTTIMES nightclub where he was head DJ in 1998 he was signed as a professional DJ by the Nightman entertainment company which led him to climb one of the highest positions in his career as Professional DJ in and out of Puerto Rico. In 2003 he began to work in his own recording studio and in 2004 he opened the record label Mix One Music, where he produced together with his musical team for the Christian and secular environment.In 2006 he began to work at the Urban club In 2015 he graduated with Honors as an audio and music production engineer.