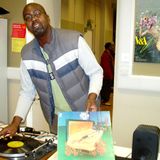 MC Patrick Vernon is based on the space station SS Sankofa which is 200 billion miles from Earth in the NOVA quadrant region in the year 2300AD. He is the curator and archaeologist at the Museum of Grooves. The museum was established for humanoids who live off world and have never been to Earth. MC Patrick has been able to restore music from this period based on anthropological research of soul, disco, jazz, funk and left field tracks. The Museum also has clothing/fashion accessories, photographs and images covering this period which provides valuable information of the phenomenon of ‘raving or clubbing’
Each show has a specially design interactive holographic images of respondents or replicants linked to database of interviews with people from the 20th Century who have a terrestrial perspective ( sometimes called opinions) in areas such the arts, music , enterprise ,politics , well being, and community affairs. This information provide