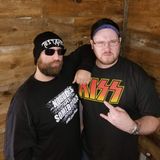 Chad Vice and Kevin Matthews explore some wicked awesome 80s hard rock tunes by big, small and obscure artists on their weekly radio show, and play you songs that aren't the same overplayed radio hits. They play forgotten gems or album cuts, and discuss the music and the stories behind them! They also throw in a new song or two that they've been rocking out to each week and are big supporters of 80s bands releasing new music

Questions about the show or have a radio station that wants to carry our show: Unpaid Promoter Maryse: unpaidpromoter@gmail.com