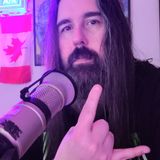 Whether it be the soundtrack of your youth, with hard rock and heavy metal of the 70s, 80s, and 90s, on POWER HOUR, Or its the fresh, new heavy metal and hard rock on R3TROGRAD3, Or a mix of new & classic metal on METALLIC UTOPIA (new). All the freshest heaviness and the rockers that bring back memories are right here. You'll want to SUBSCRIBE, so you don't miss out! Dig in and CRANK IT LOUD!!