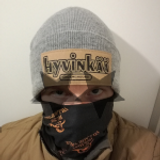 Never miss another
show from Paavi

An utterly nostalgic and personal April mix
by Paavi

Originally from Southern Finland's Railway and Wool Town Hyvinkää, Paavi has used several different pseudonyms along the years but the dearest one given by a long time friend just stuck better than the other. He played his first public gig at a school party as an exchange student in Gera, Germany in 2001 and "sold out" in 2003 and has since played more pub and your-average-Finnish-nightclub gigs than is healthy for someone who's real passion isn't the mainstream or "(s)hit music only" (tnx NRJ). Occasional breakouts have happened though and some recordings of them you'll find among the uploaded mixes. You may or may not spot that the hard school of playing just about any possible kind of music to varying crowds has taught him something useful about structure, programming and surprises.