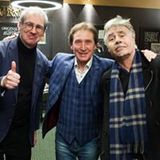 CLICK ON EACH SHOW TO FIND A DESCRIPTION OF THE CONTENT & GUESTS. I make a weekly radio music & film show entitled Henry Scott-Irvine Presents for Resonance 104.4 fm https://www.facebook.com/TinyFilmClubRadioShow looks at independent cinema, music and arts. I 've been a weekly broadcaster on Resonance fm 104.4 fm London and DAB Resonance London for over a decade with shows that are 'live on air' interviews with famous film makers, producers , directors, authors, musicians, singer songwriters, guitarists, political journalists, film journalists, music journalists, rock photographers, composers, actors, and comedians who all participate in discussions and interviews while bringing in songs that are a soundtrack to their lives. I also insinuate some music upon them for them to comment on. My alter ego is the name on the show Henry Scott-Irvine Presents - we are the very same person. My radio shows from 2009 till 2016 can also be found here https://www.mixcloud.com/henrysgigs/