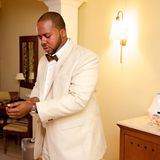 Never afraid to go too deep or to take an out of left field detour, his emotive musical selections are his own therapy. Having grown up on his parent’s eclectic combination of funk music (George Clinton, James Brown, Sly Stone), Soul/R&B (Stevie Wonder, Curtis Mayfield, Earth Wind and Fire), synth-infused 80s music (Prince) and World Music (Fela Kuti, Bob Marley, Rob Way, Sun Ra) … all which became infused with his own love for both hip-hop and tv theme song music, Greg ended up with quite a mixed spectrum of musical influence. Today, this translates into sets where he blends together all the pieces of this music that he loves best: beautiful synth work, ethereal backdrops, funky basslines, and the occasional ratchet/trap vocal.

As a talented home cook he has found plenty of ways to express himself artistically. The “Feelgood” movement collaborates with local chefs, DJ’s and mixologist to create all backgrounds come together for a great time.