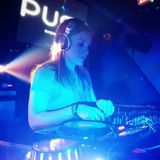 First Attempt at Liquid DnB- for your Soul
by DJ Emily

Making her debut in 1999, Emily began her journey as a DJ in the underground Chicago house scene playing events, raves, clubs and house parties. Prior to DJ-ing, Emily was brought up in a very musically influenced home and took up many musical instruments over the course of her youth, including piano, clarinet, guitar and bass. When she discovered her purpose as a DJ, it all came together. She got into the scene around 1997 and immediately fell in love with the music and the vibe. Emily joined forces with the 219 Collective out of Northwest Indiana in 2000 and has since then grown a following and hosted dozens of local events. There's only one other thing this girl loves more than dancing to a great house set, and that's dropping those jackin’ tracks to get the dance floor moving. Inspired by funk, disco, jackin’ and even on the occasion tech house, she has a very fine tuned sound selection and a particular ear for the cuts. www.facebook.com/emily219 www.soundcloud.com/emily219