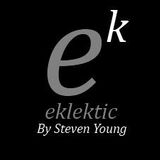 Born in Brussels in Belgium, Steven Young moved to south of France in 2005 and created the concept "Eklektic" in September 2009. Between 1999 to 2002, Steven was influenced by a radio show called Ballade Nocturne which was a broadcast on Sunday evening on a french radio. It was hosted by a DJ called Max Campo. Its programming consisted solely of relaxing music combining various musical genres ranging from ambient music to film music through trip hop.

This experience forged Steven’s personal style of music - a mix of ambient, chill out, down tempo, trip-hop, Ibiza sounds, oriental and classical music - which finally became Eklektic. In June 2010, Steven Young launched his two first mixes called: The beginning and A Rainy Morning, a sunny evening. And because they received a great feedback by the audience, Steven decided to start to produce new releases on a regular basis. Since then, it is more than 60 mixes that have been published.