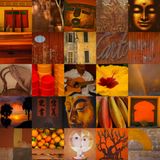 A big influence came in the early 90's in the shape of the Cafe Del Mar series as instrumental music for it's own sake began to make inroads into the worlds musical consciousness, where music didn't have to be a "song" but could stand alone as an instrumental piece. But the difference was it was music not wholly played on traditional instruments but introduced electronica into the mix, with all sorts of wonderful sounds and delays that conjured up musical landscapes and exotic worlds of sound. I was well and truly hooked. To me it was almost like a new beginning for music. I was searching for soundscapes that painted pictures and the selections I was hearing on the CDM comps had this quality in abundance. My first release was in 2006, I have now released 41 albums and appeared on over 2,500 compilations.