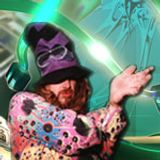 Never miss another
show from doctorspook

DJ/VJ Doctor Spook aka Mindstorm and member of Phoenix Family project (San Francisco, USA) Also known as Nathan Vogel, Spook is an award winning 3D animator & music video director. He began creating psychedelic visuals in 1992, receiving critical acclaim for all of his projects. Nathan has worked with major music labels such as Arista, Geffen/Universal, Sony, Om and now with all of the most prominent Psy-trance labels with ground breaking new releases. Spooks passion for electronic music drove him to start making music in 1990. He began DJing Psy-trance @ Burning Man festival in 1998 and since has toured the world and shared the stage with the biggest names in dance music.

www.Geomagnetic.tv was established in the summer of 2001.
Based in San Francisco and focusing mostly on visual and music related projects, you can expect to see lots more cutting edge releases on the way from this award winning crew! Geomagnetic.tv was started by Spook one of the founders of www.MindsEyeMedia.com