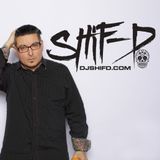 DJ Shif-D started djing at the ripe age of 16! He Djed his own 16th B-Day Party on 2 home cd players and a radio shack mixer with lazer and bomb effects! After checking out the rave scene in Omaha he began to take on mixing full force. Shif-D became the most booked dj at house parties in Omaha, and Wayne, NE during his college years. He became the resident DJ every Thursday at Wayne’s main dance club Riley’s. After graduating from college, he took a break before venturing into the Omaha club scene. Soon he became one of Omaha’s top booked djs, even playing out 5 days a week! In 2007 and 2008 DJ Shif-D was nominated for Omaha Best DJ at the Omaha Entertainment Awards. In 2009 Shif-D made it to the semi finals for the Bricktop DJ Competition, showing Lincoln he was a true player in the electronic dance music scene. Shif-D mixes all genres from hip-hop to house music and everything in between. Having a understanding for all styles of music, he can control any dance floor.