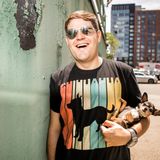 Nicholas Minaj, also known as Nick Ferrington, began his DJ career at the age of 13 by borrowing his parents' home stereo equipment to throw all-ages parties at banquet halls in his hometown of Whitefish, MT.

After moving to Missoula, MT, he picked up DJ gigs at weddings, frat parties and strip clubs to help pay the bills while pursuing his college degree. In 2010, Nick moved to Boston in an effort to land a job in the professional sports industry, After job rejections forced him back into the DJ industry, Nicholas Minaj realized his calling wasn't behind an office desk, but behind the turntables at parties across the nation.

Since then, Nicholas Minaj has performed endlessly while producing original mash-ups and tracks across various genres of dance music with a main focus in Melbourne Bounce. He is a resident DJ at the Boston edition of Bootie, the largest syndicated club night in the world.