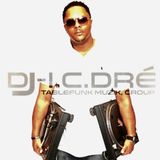 Never miss another
show from Dj-I.c.Dre

Success hit big, when DJ-I.c.Dre’ was recruited to tour for Hip-Hop Super Star TWISTA. “I entered a Dj Battle in Chicago and won". From there, TWISTA offered me the opportunity to dj and produce him. I did this five years straight which took me around the world. Everybody can tell you, you’re good, when you’re from the same hometown. But, when people from around the country and internationally acknowledge your talent, that’s when I realized I really had something.”