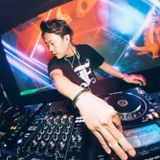 Started his music career in 2001 and has been an experienced DJ mainly at Club Atom in Shibuya.
he excite the spectators with his four beat music selections.
In 2008 he released his first produced Trance Wars with DJ Kenzo's Unit, Los Hermanos, and had a successful nationwide tour.
Moreover, with his WMC-WORLD MUSIC CRUISE collaboration with DJ TORA, as a MIX CD of EDM, it became no1 in iTunes DanceChart and no6 in the General Dance Chart.

Currently, he is extending his activities by continuing to be Event Producer at ATOM, appearing as guest in various local events and being regular at Japan's biggest CLUB ageHa, and has come up with a surprising 250+ DJ SET.

As a DJ and Events Producer, we cannot but focus our eyes on this individual who amazes the Shibuya crowd.