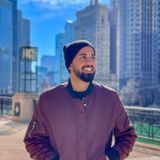 DJ Hawk, aka Alexander Haq, is a radio/club DJ & music producer from Houston, Texas. He was most recently the Morning Show Producer for The Breakfast Club with Charlamagne The God, Angela Yee, & DJ Envy at 93.7 The Beat Houston.

Born in the eighties but raised in the nineties (the golden era of music), hip-hop, R&B and dancehall surrounded DJ Hawk as a child. He began flexing his muscles around turntables in high school that followed him to college. He then ventured into creating mixtapes which would later feed his appetite and interest in music production. Working closely with Houston and Miami based producers and
Jamaican hitmakers such as Chimney Records; David Hayle and Jordan McClure, DJ Hawk recognized that he had the penchant for executive producing and riddim production.

Arguably one of Houston, Texas' finest disc jockeys and music producers, DJ Hawk, knows what it means to lay things out creatively and calculatedly. These characteristics were inherited directly from his pare