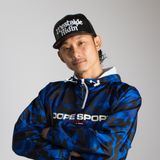 Many Collaborations with US Artists such as NIPSEY HUSSLE - Japan Tour, Official Mixtape

Through his various work throughout LA and Tokyo, DJ Couz showcases his multiple talents worldwide as a DJ and producer. His deep knowledge of the West Coast Hip Hop culture has established him as a unique DJ, and his lifestyle, as well as his DJ style, has brought many followers.

He often appears on Real 92.3 FM and its events as a homeboy of Big Boy, a well-known Real 92.3 personality. DJ Couz has been involved with “Big Boy & DJ E­Man presents Mickey Fickey Mix Japan Tour” from vol.1 to 14 since 2001. He has also brought many artists to Japan, such as Xzibit, Kurupt, DJ Quik, Baby Bash, Frank...Read More http://dj-couz.com/profile-en