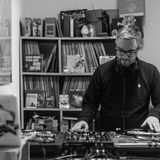 Never miss another
show from Orbeat

Swiss Turntablist Orbeat is known being the man behind the desk for Saimon Disko and Disko4Stack. He coordinated a seminar about Hip Hop with his friend Static Fanatic. Besides he digged in the creates and build a little record collection with sounds from Hip Hop, Funk, Soul, Latin, Rock over Soundtracks.

His music is best discribed bricolage of cut-and-paste Hip Hop/Trip Hop mixed with rhythmic scratches and juggles. His samples come from the black gold, but also from movies, series or TV-Shows.

Released 2019 with Darrell and Franklyn the heavy rotation single "Chatzägoud".