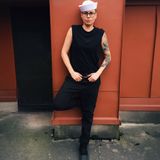 Never miss another
show from DGERAL

Dgeral aka Espejo Negro comes from Caracas (Venezuela), where they were one of the first queer feminist DJs / producers who worked in the scene since 2001. In 2004 DgeraI moves to Europe and becomes part of the female: pressure organization that promotes and supports female, trans and non-binary electronic producers and artists around the world.
Dgeral is now based in Stockholm, organizing an underground collective called BOiBOiCLuB with Spakly Pony (Dj/Producer), Further more continuing producing electronic music and noise music under the allias of Espejo Negro, also collecting vintage synthesizers and playing at various queer clubs in Scandinavia, the US and Europe.
Dgeral's style is unique and eclectic
https://www.facebook.com/DgeralDJ/
https://soundcloud.com/dgeral