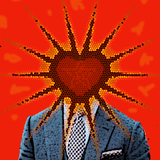 Originally airing Saturdays from 4PM to 7PM Pacific and broadcasting to southern Vancouver Island and the south coast of British Columbia, The Lovecast ran in that time slot on CHLY until it celebrated its 16th anniversary on air.

Originally a three-hour program navigating a mind blowing selection of sounds spanning time and style and featuring interviews with an exciting range of local, national, and international musical talent, as of March 2019 The Lovecast now makes its new terrestrial radio home on the familiar and wide ranging transmissions of the mighty CIUT FM, Toronto.

Airing Friday mornings at 12am to 2am from Toronto, broadcasting to southern Ontario on 89.5 FM, Dave O Rama takes you on a journey through his schizophonic ears. From roots and blues to electronic moods, from orchestral to free form, dub stylistics, Latin soul psychedelics, global grooves, Afrocentric moves, and whatever other sonic delectables he digs up to stir into the pot.

The Lovecast with Dave O Ramadaveorama3000