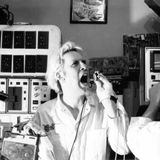 TradeMark G. (aka Mark Gunderson) is a musician and artist who pioneered the cut-n-paste music style now known as mashup with his band The Evolution Control Committee, founded in 1986. Best known for its copyright-challenging stance, The ECC earned a legal cease & desist order from CBS for sampling newscaster Dan Rather as well as other refusals to press and distribute their albums. TradeMark is also hardware and software designer/hacker whose creations include the Thimbletron and the VidiMasher 3000. TradeMark has appeared as the face of The ECC on air from CNN to C-SPAN and in print from Spin to the Macmillan Dictionary, and has given nearly 1,000 performances and presentations at festivals, concert halls, bars, and galleries all over the world.