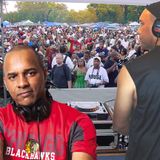 Born a music industry brat under the wings of his dad Maurice McAlister (staff songwriter for Chicago's legendary Chess Records and lead singer of The Radiants), Rory sat in on a countless number of historic recording sessions at Chess as a kid while pops got the work done. This natural connection to the hearts of soulful artists and the music making process eventually translated into Rory developing his South Side DJ craft. Mentored by the vibrations of Frankie Knuckles in the atmosphere of the original Warehouse (US Studio), Rory & his Rare Sounds of Space DJ crew (RSS Force) were one of the first movements back in the day to beat Chicago streets with what the local scene eventually termed as 'House Music' in signature venues such as The Loft, First Impressions & Sauers to name a few. Changing the DJ game in Las Vegas since 1984, honorable mentions include 'DJ Pioneer' recognition in Vegas Seven Magazine's 2013 Nightclub Awards issue and 2014 Chicago DJ Hall Of Fame induction.