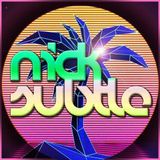 Never miss another
show from NickSubtle

Nick has been producing music since 1998 and was initially very heavily influenced by the trip hop sound of Mo Wax records. His styles range from Hip Hop & Trip Hop, through to electronic dub, Jungle and more recently, Disco, House and Techno.

As a DJ, Nick plays regularly at various venues around Brighton and is available for private functions, weddings, radio and everything else in between, Nick mixes a whole bunch of styles from Glitch Hop to Afrobeat, experimental noise to Folk, Reggae and Calypso.

If you like anything you hear and would like to get together to make some noise, don't hesitate to get in touch.