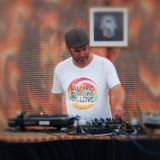 Steve KIW is a founder member of the Balearic Assassins Of Love. Steve hosts the BAOL show on 1BTN every Thursday (6pm-8pm UK time). All shows are posted here, as well as Steve's guest mixes and occasional live sets.

He also moonlights as 'Xavi' in 'Andres y Xavi'. Their second album 'Sounds From The Secret Bar' was released in summer 2021.

Steve has been DJing since the late 80s. He has amassed a collection of over 30,000 records. These days he is very much grounded in the Balearic scene but the collection covers much, much more.

In recent years, in addition to his Guilty Feet Balearic Rhythm residency, Steve has DJ'ed at notable events and venues such as Pikes (Ibiza) for We Love Sundays and Ibiza Sonica, Babel (Ibiza), We Are The Sunset, Aficionado and friends, One Million Sunsets, the Alfresco festival, Two Tribes and Spiritland.