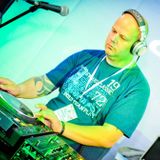 Resident D.J. @ Acid, Ibiza
“Don’t talk genres…Talk MUSIC!!!”
This is the main philosophy that drives Max Sebastien in his sets. As he started his musical career in the mid 90’s he was always involved in different styles of the Rave scene. Thats why, in his record collection, it is possible to find any aspect of electronic music from Hardcore to House. Max Sebastien is never afraid to dig into styles that have influenced him during his career. For many years he was deep into Trance which he tried to blend with Hard Techno.
In 2000 was the start of many residences in various clubs in Slovenia, but he also had the opportunity to play in Italy, Croatia and Spain. Between 2000 and 2009 he was also a resident DJ in one of the biggest european entertainment centres where he had the opportunity to play for a different crowd and dig more into House and everything from 80s and 90s. Moving to Tech House felt like a natural next step.