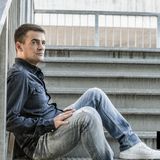 Born and raised in Italy, his professional experience within djing starts back in the 1997 when he played for the first time at the Super Club AMBASADA GAVIOLI.
Co-Owner of EARRESISTIBLE MUSICH SHOP, he had been involved into the organization of events as well he had been playing at all major festivals and club around the area, performing together with international artists such as David Morales, Roger Sanchez, Frankie Knucless, Todd Terry, Marshall Jefferson, Bob Sinclair, The Shapeshifters, Mark Knight and many more.
In the last few years, Dave has been working at venue such as Ambasada Gavioli, Kurzchluss, Cvetlicarna, Boogaloo, Byblos, Colosseum, Jax Club just to mention a few.
As producer, he is regulary publishing on Stereophonic Records (Italy) where he is working as A&R and event manager since 2019.