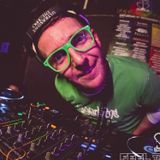 Never miss another
show from Greenbins

Jungle Set for Rejuvenation Takeover Day at Unity In The Sun, Kavos, Corfu (May 2019)
by Greenbins

Come Together Promo
by Greenbins

Greenbins career as a DJ stretches right back to warehouse parties that brought about a cultural revolution in the North of the UK in the late 80s and early 90s. He was a regular DJ at those parties, and also a resident DJ at a small, but legendary club in Blackburn called Monroe’s in 90-91.
From Monroe’s other residencies and guest spots soon followed at venues such as Sequins, Zone & Jooce in Blackpool, Angels in Burnley, Manhattan Heights & Peppermint Place in Blackburn, Quadrant Park in Liverpool, Revenge Parties, Blackburn warehouse parties, 808 State Show on Sunset FM, Maximes in Wigan, Manhattans in Southport... to name just a handful.
Greenbins was also an original resident DJ on Friday nights with DJ Welly at the Pleasuredrome, and was also to feature heavily when the night was moved to Trafford Park and became Life @ Bowlers.
http://www.instagram.com/greenbins
http://twitter.com/djgreenbins
http://www.facebook.com/Greenbins