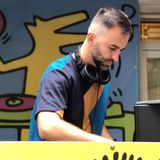 Never miss another
show from Fu_Ancko

Like a beast hunting his prey, Fu Ancko keenly observes the crowd, sizing it up before he lashes out with his sound. He keeps his cool because he's no amateur, he’s an exprienced musician. His stylistic inspiration comes from bouncy percussion loops, basslines with an acid flavour, trippy synthesizers as well as tech-house, house, deep-house and techno. His mixes sketch an urban landscape that comes alive when the crowd starts moving to its beat, spreading beyond its borders, reaching out to people everywhere with each rhythm.