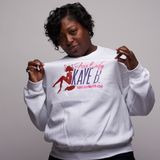 Never miss another
show from FoxiLady Kaye B

The first time Kaye pressed "LIVE" on the radio mic, she was hooked.

It was her first day of school at Illinois Center for Broadcast, and it was her passion to be a radio personality. Drawing advice and inspiration from the recent loss of her grandmother, Kaye entered into the realm of radio. During her first day, she experienced the thrill and excitement of being a radio personality. Since that day, Kaye had (needs to be HAS) taken the radio scene over with her unique personality and knack for what good music sounds like and what appeals to a audience.

In 2005, she began to host Outside The Box, as a radio personality for Chicago House Radio. That year, she also showcased her multitasking skills by becoming the Vice President of Mophi & MoFyne Records, where sh to work on the other side of the spectrum, honing in on her ability to find raw, undiscovered talent.

In 2006, she switched channels and became a radio personality at Spin Club Radio, hosting a