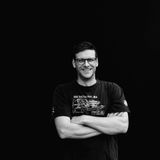 Never miss another
show from Delfonic

Mix for Nómada Records
by Delfonic

Love On The Dancefloor
by Delfonic

Delfonic started his professional DJ career in 2004 and has meanwhile played every single club, shack and party in Berlin, and quite a bit in Germany and Europe too. He is holding two residencies, one weekly at Gretchen (the infamous follow up to the Icon Club) and a monthly one called “deep riot” at Farbfernseher. His residency at Icon/Gretchen led him to play very successful sets alongside internationally acclaimed DJ's as Coldcut, Amon Tobin, Bonobo, FaltyDL, Jazzanova, Flying Lotus and many more.
Markus is also vital in providing (Berlin's) Djs with music via his record store OYE in Prenzlauer Berg and organizing the incredible Berlin record store day once a year (in November).